Samsung has been sneaking a sneak peek at upcoming One UI software beta program changes on its smartphones a beta program for a long time. You sign up with your smartphone and then have access to earlier software. You can then provide feedback to Samsung on what works and what doesn’t.

Now, Samsung seems ready to bring the same approach to its line of smartwatches. According to an official forum post, Samsung will launch the Galaxy Watch One UI software beta program in its native South Korea on June 2, 2022.

Forum posts detail how the program will work. Essentially, it’s the same setup as the One UI software beta program for smartphones. First, you sign up for the beta in the Samsung Rewards app on your phone. Once accepted, your Galaxy Watch 4 or Galaxy Watch 4 Classic (the only wearable device with access to the program) will receive an over-the-air update with beta software. You install it on the watch and proceed as usual. If you encounter any bugs, you can let Samsung know about them.

How to request for installation of the One UI software beta program? 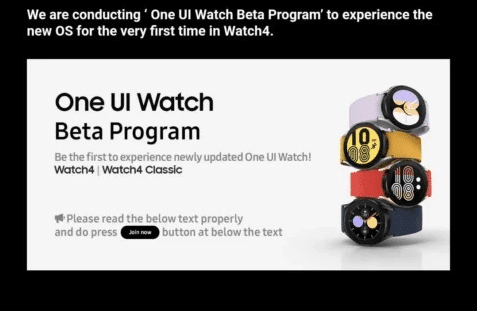 Join us on Our Samsung Galaxy One UI” Telegram Channel

Remember, the One UI Watch is based on Wear OS, which is jointly maintained by Google and Samsung. Beta versions may also feature new Wear OS features. We’ll keep you informed as soon as we gain access to the beta.